The rain started shortly after 11 AM, as forecasted. At first, we could ignore the random drops, but later, the rain became more substantial, and we switched to numerous museums and cafes.

The first cafe we landed in was Maiasmokk, the oldest in Tallinn (in business from 1864). That was the first public space we entered in Tallinn, and there we learned that by city ordinance, proof of COVD vaccination is required to enter any place. Masks are still required.

Tallinn depends heavily on tourism, and I was very happy to observe that this requirement didn’t impact tourism negatively and that the business owners were happy to comply with the city ordinance.

END_OF_DOCUMENT_TOKEN_TO_BE_REPLACED

While in Helsinki, I try to combine work and doing something interesting together. Until today, the weather was great, sunny, and not as cold as everybody told me it was going to be, so we went on long bike rides every day, including the very first day I came.

Boris discovered several new bike routes, and each day, our ride was different and very scenic. Boris often reminds me the story which happened to me on one of my early visits, when I thought that if I needed to get from one point on the shore to another point on the shore, I could do so by walking along the shoreline:)

I am not making this mistake anymore, but all three of our rides were along the shoreline (for my love of it :)).

END_OF_DOCUMENT_TOKEN_TO_BE_REPLACED

I had half a package of ricotta left from my ricotta and merengue buns, and I had half a bag of spinach, which was left from the quiche, and I had some frozen puff pastry – here is a result:

It was fast and easy, and I really liked it!

END_OF_DOCUMENT_TOKEN_TO_BE_REPLACED

Boris asked me to call him on facetime when the plane touches the ground so that he will get ready to go to the railway station. I am so happy that I have my internet with me for no extra cost! Yes, my Sprint plan is not cheap, but with my amount of travels, it’s great that I never have to think about it. The moment the plane lands, I can start using my phone.

I have not been here since May, and I forgot that I have a Helsinki transportation app on my iPhone. I could buy my ticket on the way from the baggage claim to the train, and hop on the first train that has arrived. It’s a minor delay, but it shows how we all are creatures of habit. I forgot the way I did it once but remembered how I did it for many years.

When we met at the Central Train Station, he took me to Robert’sCoffee for a cappuccino with a cinnamon bun. It has become symbolic for me – the first meal on the Finnish soil has to be a Finnish cinnamon bun 🙂

It’s the 50s here, compare to our upper 70s, but the fall colors are beautiful!

And I finally got a bike! We talked for a long time of me having my own bike in Helsinki so that I won’t have to rent each time. Boris was always saying that this goes not provide any economic advantage, but the difference is in time not wasted, and I believe it’s worth it.

Most of the stores were closed on Sunday afternoon, and I didn’t like the bikes we saw (they didn’t fit my small body :)), but this morning we finally got what I needed! 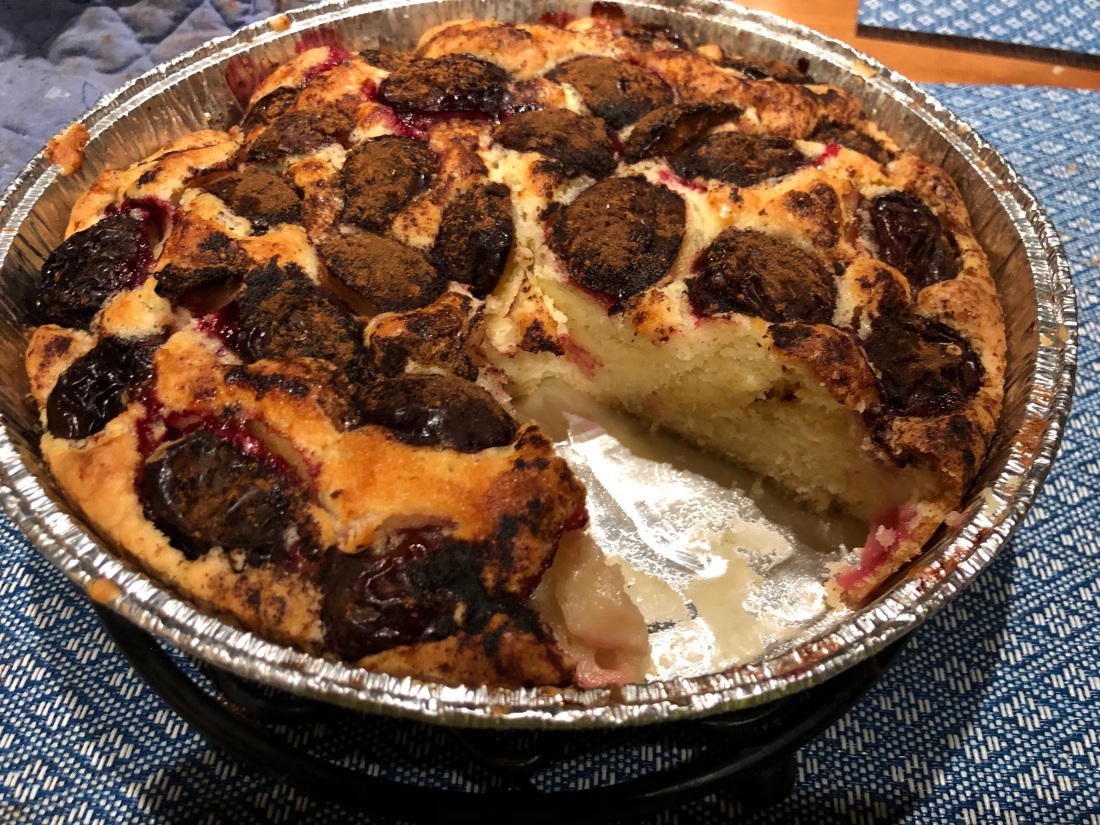 I think many people can relate to this statement – baking is an excellent way to fight stress. Sometimes, when I am exceptionally stressed, and most often, this happens when I do not have time to do something important, I drop everything and bake. My Finnish friends are my never-ending resource of easy recipes. Remember, I said that I am afraid of complicated recipes with many ingredients? I have a couple of friends who provide me with those.

I wanted to bake this pie in one of the two days earlier this week before I would head to Madison. And I was planning to bring a result with me. But I was so running out of time, that I didn’t. I felt it being a “non-closed issue.” I loved this recipe from the first sign because I do not consider plums, along with apples and pears, fruit. I put them into a dessert category right away.

END_OF_DOCUMENT_TOKEN_TO_BE_REPLACED

The only close to that experience I can remember is being in Prague in September :). So many tourists on the streets, it’s difficult to walk. Weekend or weekday – does not matter. Lot’s of people everywhere. Lots of bicycles. People, cars, and bikes are trying to get from point A to point B and back without even pretending they are following the rules :). If it were by me, I would choose different dates to come here.

The city tries to survive this tourist invasion. Honestly, I can’t even blame anybody. On the big scheme of things, that’s their city; it belongs to people who live there, not tourists. My local friend commented on the poor quality of service here in Amsterdam, and in Holland in general. And sadly, I have to agree with her. But once again, I can hardly blame anybody.

In addition to really wild traffic on the sidewalks, the next problem we’ve faced was the operation hours of most of the places where you can eat. Being not just American, but also from the North, and even for a person from the North an extremely early riser, not being able to get breakfast on Saturday before 9 AM was a real problem. I am up by 5 AM regardless of the day of the week, so you get the situation :). On Saturday morning, although my sleep time was adjusted for the previous 31-hour day:), I was up by 6-20. We tried both breakfast places recommended by our host, but one was closed till 9, the other one was opened by 7-30, but they said, that they might have some breakfast “in an hour.” A couple of other places where just opened (about 8 AM), but took our idea to have breakfast in such a time on Saturday as an insult :).

Finally, one place close to the central train station was opened and had decent food, good coffee, and even fruits 🙂

Most of the time we travel, we enjoy trying some local street food, and I have some “calorie budget” allocated for that. One very satisfying experience was baked potatoes: