Today, Russian State Duma changed the penal code to increase penalties for conscripts dodging draft, put in penalties for willingly surrendering to the enemy and reviving Soviet-era penalties against “marauding” (while also adding what would count as extenuating circumstances, which includes participating in the armed conflicts). And there are also supposed to be referenda on joining the Russian Federation in separatist-controlled parts of Donesk and Luhansk oblasti (the self-proclaimed People’s Republics), as well as the Ukrainian territories Russia occupied since the start of the war. The logic seems to be that, if Ukraine continues its advance, they would be attacking Russian territories, which would justify putting the country on war footing and partial mobilization. (As many people, including some pro-war commentators, have pointed out, the Russian Federation simply doesn’t have the infrastructure and the personal for the full-scale, World War II style national mobilization – then again, I can’t entirely rule out the Russian government trying it anyway).

The whole thing is flimsy as hell – but again, so is a lot of the spin coming out of Russian state media.

END_OF_DOCUMENT_TOKEN_TO_BE_REPLACED

Today, the Chicago Public Library hosted a meeting with Toya Wolfe, and my goal was to finish Last Summer on State Street before this event. (by the way, all library copies were taken, including the audiobooks, so I purchased it).

I am glad that I could attend and be a part of the conversation with the author. As someone who actively participates in the work of several volunteering organizations which service underprivileged communities, I was deeply touched by the events described in this book. Way too often, I see similar stories unfolding: no matter how hard we try to help the youth in crisis, in most cases, we can do nothing.

Answering one of the questions from the audience, Toya Wolfe made the following analogy: if you go to the war, you might return alive, or you might die; it’s often the question of chance. But if you go to war malnourished, there are higher chances that you won’t survive, although there is still a chance. In the same way, growing up in an unhealthy environment or in a broken home increases the chances of a youth getting into trouble, but at the same time, there are still chances for a good outcome. After today’s meeting, the book feels a little bit less depressing:).

Igor has better pictures 🙂 – check them out. 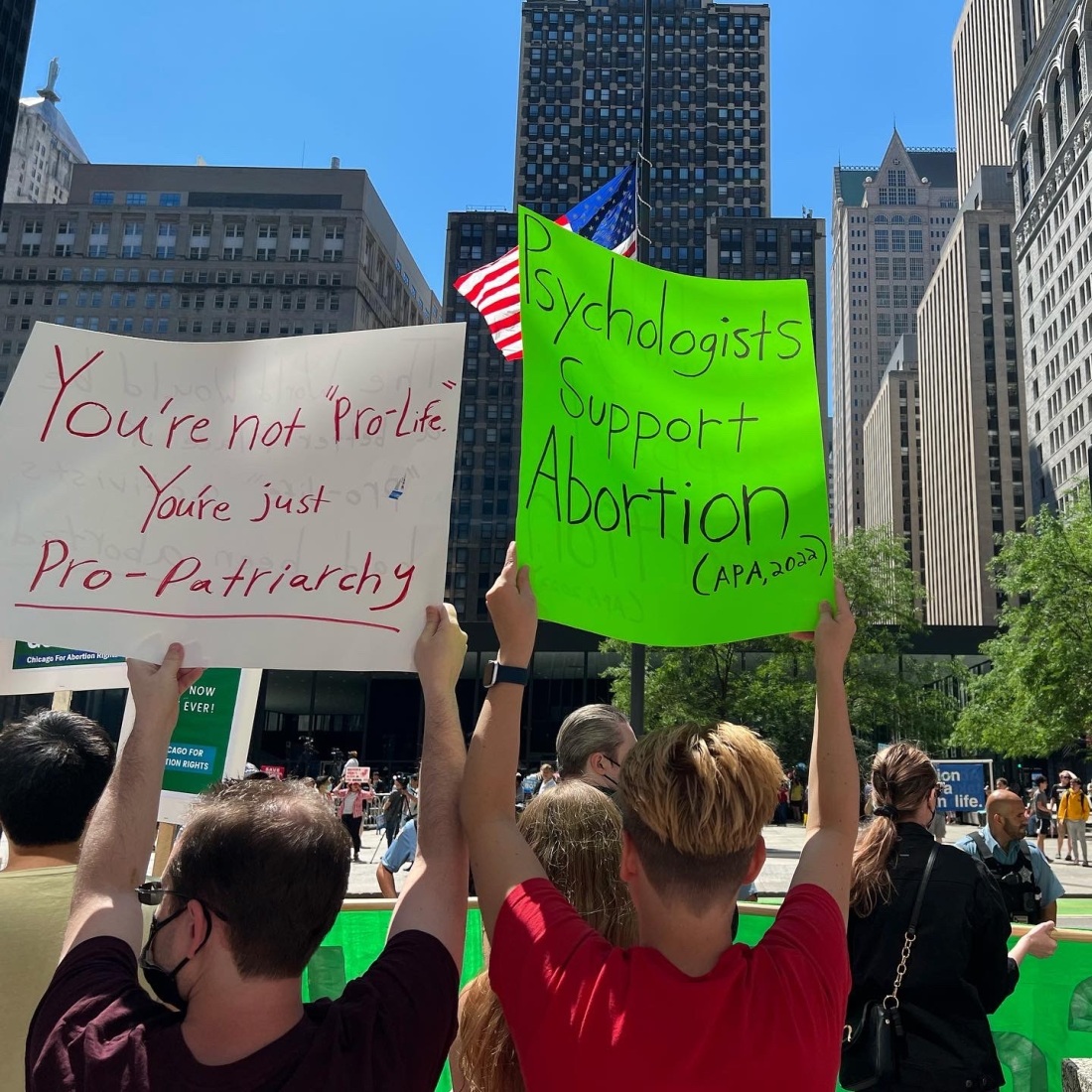 Today’s escorting was tiresome. It’s not that there were more antis than usual, and not that they were especially aggressive, but they behaved the way that demonstrated their confidence. One of them (I have a history with him and hate him with a burning passion) gave me an evil smile: how many states are left where abortion is still allowed? They act as if they are masters of the land.
I, together with another escort, guarded the side entrance. There were two antis, but they left soon. Shortly before that, a van with contractors stopped by – they were looking for the manager of the next-door Japanese restaurant. They were shocked by the scene they saw and said that they thought it was some rally, and they didn’t want to believe me when I told them that we have it every Saturday!

Oh, and also these protesters announced that they “love Ukraine!” I am speechless!

There was a counter-protest against the March for Life, which was going to “celebrate” a Roe/Wade overturn. Our goal was to silence the speakers on the opposite side of the street. On the one hand, we dominated. I remember many marches with tons of antis and just a few of us. This time, there were more of us, way more! And we were indeed louder than them. But on the other hand, I almost cried all the time marching because we lost no matter how loud we were. We lost when Roe/Wade was overturned, and it will take years and years to fix it. Meanwhile, people need help right now.

END_OF_DOCUMENT_TOKEN_TO_BE_REPLACED

This article was printed shortly after the SCOTUS decision to overturn Roe/Wade. I sent it to one of my colleagues to illustrate how complicated the issue is and why many companies are careful about not explicitly condemning this decision. It is not so unanimous even in the Blue State of Illinois.

I wanted to share a great resource available on The Night Ministry website: Be a better neighbor to people experiencing homelessness.

Please check it out to learn how to help your homeless neighbors and how to treat them with respect and dignity. 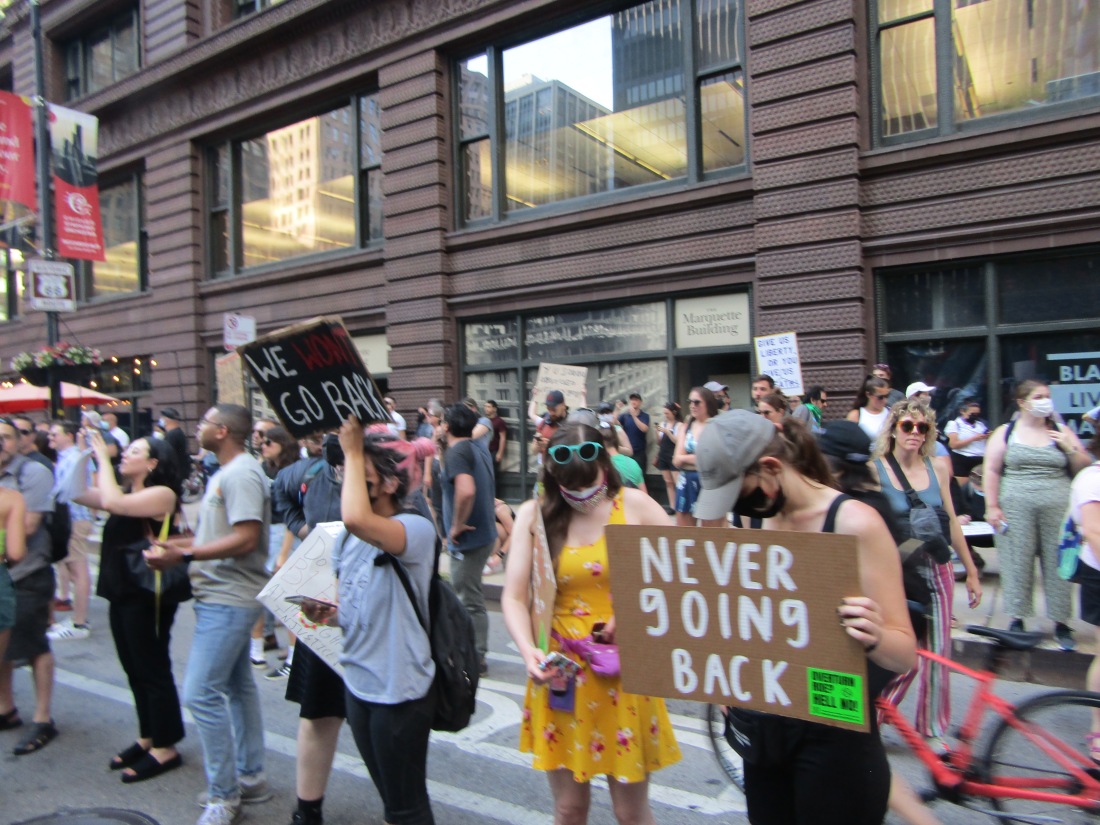 My Apple watch flashed on the news in the middle of the conference, and right in the middle of me trying to figure out all the flight changes. I didn’t blog about it yesterday, because of all the other things going on, but this was the worst news of the day.

I said before that I am sorry to miss these warm summer days in Chicago, but what I really miss now – is not being able to march with others, and not being at the Federal Plaza yesterday. I just saw Igor’s pictures, and I am glad that people turned in instantaneously, but OMG… I did not believe SCOTUS will do it for real! Igor’s pictures below:

When I returned from Europe at the beginning of May and looked around, I realized that the war dominated my life so much that I completely ignored pretty much everything. Not only did I put my life on hold and almost fail several important things, like conferences readiness, but I also ignored what was going on in my country.

Once again, I can’t change the development with Roe/Wade, but at least I can protest.

At first, it didn’t look like the potential SCOTUS ruling changed the situation around the clinics, but later, things started to get worse.

There were some very loud (at how to put it? Not so smart) antis who just repeated the exact text over and over and tried to harras the patients (and often – not even patients, doing horrible profiling).

This time, they brought an amplifier, and they first set it up at the corner of Washington and Des Plaines, but in about 30 min, they moved it to the bridge over the expressway, and then it could be heard at the waiting area of the clinic. We called the police, and they actually arrived, but then they did nothing! I still can’t believe it! They didn’t tell antis to turn the volume down! Honestly, they would rather not come at all!

The video below shows how loud they wee, and how police did absolutely nothing!

Also, I finally got contacted by MAC (Midwest Access), because they are getting ready to resume accommodating the out of state patients in private residencies. I told them that I moved, and I should have another home visit next week. I hope I will be able to helo that way, too!

I hear it a lot: how unsafe the CTA has become during the pandemic, especially the Red line. Not only do I hear about that, but I also see all the homeless people, especially when I happen to take a very early morning train.

I believe this article in Tribune provides very in-depth coverage of the problem describing measures already taken and some immediate plans.

As usual, copying the text here.

END_OF_DOCUMENT_TOKEN_TO_BE_REPLACED

While in Europe, I almost entirely missed the new development with the Roe/Wade overturn. Then, I felt guilty that I didn’t pay enough attention and didn’t participate in the protests. I was flying in on May 1, so I missed all May Day things. I got a little bit of the protest last Saturday after I took mom to the Joffrey Appreciation Day, but they were almost done with the rally by then and were preparing to march.

Today, I went escorting and thereby was unable to attend the event in Union Park.
Escorting was definitely more important because antis went wild. What surprises me is that antis are always using the same old tune. They didn’t come up with anything except for the same old “you are murdering the human beings.”Today, I was busy the whole shift, walking the patients to and from their cars, making the human corridors, and making noises so that antis could not be heard.

At some point, a clinic security guard came to stand with us and helped to hold the tarp to cover the anis posters. And he actually yelled at antis because he is not an escort :).

Then, I could not do the later protest today because of the bad planning (I had three other events, and I lined them up in a suboptimal way). I saw a lot of social media posts, and I caught a little bit of the Millennium park event at the very end of it.

The number of antis who appear at the pro-abortion rallies still bothers me. That’s Illinois, that’s Chicago, and I can’t believe it when I see huge groups of antis, so loud and talking the same nonsense. I am so allergic to propaganda after I had it all in the Soviet Union!

And one more thought, When I am asked what the abortion situation in the Soviet Union was, I usually reply that abortion was legal, it was just a very humiliating process, and no anesthetics were allowed unless you illegally paid for them. It was not until recently that I realized that the fact that you could not get an abortion after 12 weeks was an abortion limitation! It just never occurred to me that it could be different!