Last Tuesday, I participated in a focus group for the volunteers for the Night Ministry. Two days later, I was at the ODS making dinner for a suddenly shrunk population. I was chatting with the volunteer coordination and other staff members in the process, and it seemed like a continuation of Tuesday’s focus group.
One of the questions we were asked was the following: suppose the Night Ministry would have unlimited resources, how should they be allocated? What would you do first?

My response was that the staffing is the most critical part. It’s not much that volunteers can do without the support of the staff. I know what a difference it makes in the residents’ level of participation depending on who is covering the shift. The staff turnaround is high. In some cases, it might be good when the people who do not have genuine compassion and willingness to work with the youth leave. However, I think more efforts should be made to attract and retain the best people who can make a meaningful difference in the lives of the youth. It would be great if the program would be expanded and serve more young adults, but even with hypothetical unlimited money for salaries and training, the right people are not easy to find. During our conversation in the shelter, we recalled some periods when we had people on staff that should not be there in the first place. And we recalled some young individuals with a lot of potentials, which required a lot of attention from the staff.

We started to talk about the youth we met in the shelter, and it was a long list! We wondered whether everything turned out fine for them and whether they were able to stay on their jobs and not end up on the streets again.

That’s another thing I talked about during the focus group. I know that the youth who graduate from the program want to forget about that period of their lives. I remember one girl telling me: I am very thankful for the program, but I cant’ wait to get out of here!

That means that most of the time, former residents do not want to come back and let us know how they are doing. I think it would be great to have some social services that would allow us to follow up with the program graduates and help them with their everyday challenges. Even for a successful young adult, settling in their first apartment and figuring out the budget is not an easy task. The support should be flexible and should not stop abruptly after a person receives their apartment keys.

During the focus group, one of the volunteers mentioned that the training was great, but then when he went on the field for the first time, it was hard because he could not establish any contact for a while. I told him that nothing was wrong with him, that it’s all expected, and if anything, I believe the training should be adjusted to explain to the new volunteers that the transition is difficult. Later in the shelter, we talked about some volunteers who come with the firm belief that they are doing other people a huge favor and want to “share their wisdom” with even asking whether anybody is interested :).

So, why did ten people had to leave the program just the day before I came? Because they were involved in major misconduct (I do not want to share any details, even anonymously). And here is another question: yes, the rules are the rules, and it is essential that young adults who want to participate in the program follow the rules. And if they don’t, it means that they are not ready. But how can we help these young people to get ready to make changes in their lives? And is it even possible?

I do not know that, but I will be in the shelter again next week, and I hope that it will make at least a little bit of a difference in somebody’s life. 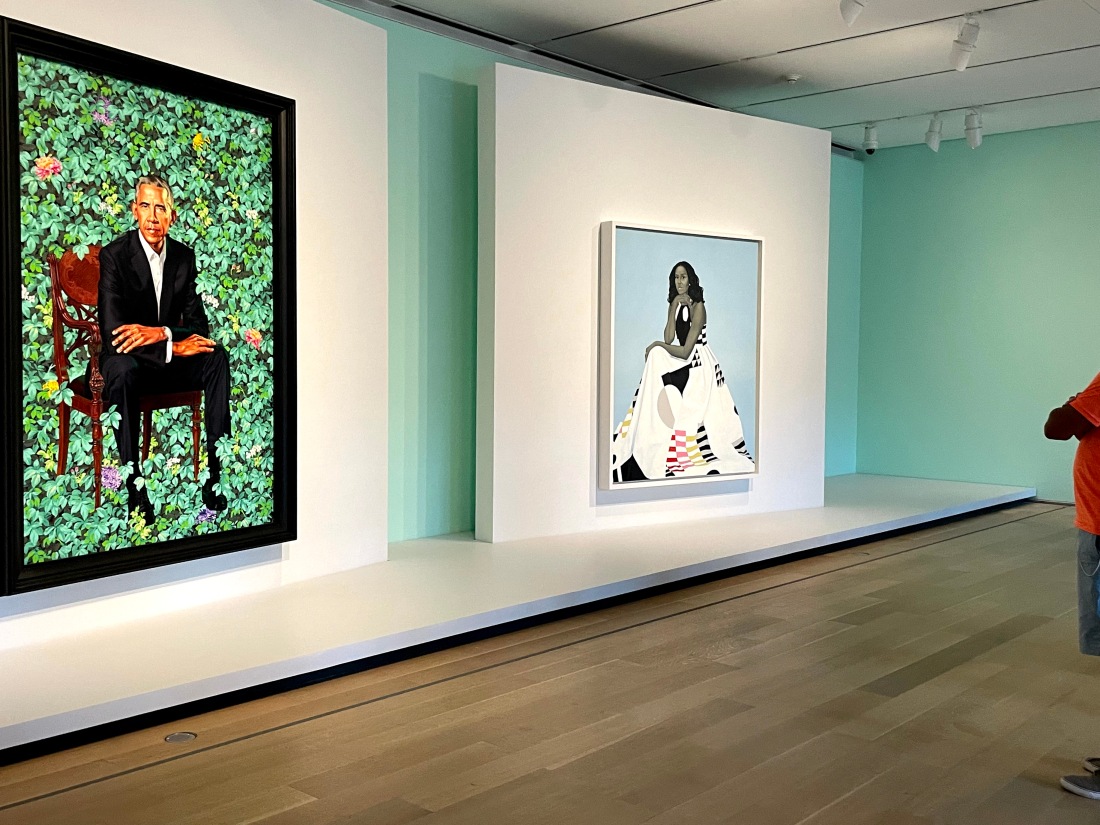 On Thursday, I went to the Art Institute with the youth from the ODS for the first time since last summer. I was hoping that waiting for this to happen. Now, several things happened simultaneously: the Art Institute returned the evening hours (Thursdays and Fridays till August 15), the Obama portrait exhibit opened, and the Art Institute Council for public relations gave the Night Ministry two dozen tickets for this exhibit, which includes the full Art Institute admission.

The exhibit is very small: the portraits of Barak and Michelle, several related artworks, and how these portraits were painted.

END_OF_DOCUMENT_TOKEN_TO_BE_REPLACED

On Tuesday, I was finally back to the Open Door Shelter – the first time since October. I could come in May, but we could not find the time between myself and their volunteer coordinator. We’ve rescheduled a couple of times, and finally, it happened!

I can’t even describe my feelings! It was not just “good,” it was perfect! We clicked with the residents right away, and they were not shy talking to me.

We made “Mom’s soup,” and almost magically, all things were in their right places, all the ingredients were purchased, and even the lid from the big pot was not missing! And we talked and talked, and made plans on what we will cook next time, and when we can go to the Art Institute together… I am starting to feel like a whole person 🙂

There were lots of “for the last time” this weekend.

END_OF_DOCUMENT_TOKEN_TO_BE_REPLACED

I still hope to make one last work day with Friends of Deer Grove, but one thing for sure – today was the last time I scouted my spring area as a Weed Scout.

I took mom with me, so that she could also see the part of the forest preserve she usually does not see. I l spotted beautiful spring flowers.

And I performed my last act of service to the Forest Preseervee – pulled out a dozen of garlic mustard plants!

Also, I educated several passerbys about invasives and why we are fighting Garlic mustard, which I guess was also an act of service.

I will miss Deer Drove, and all the people with whom I volunteered there for seven years…

I just learned that the staff and clients of the Night Ministry are vaccinated as a part of phase 1B, and many of them have received their first dose already. The volunteer coordinator emailed us that we should expect the update soon. I hope that this means that we won’t have to wait till the end of March to resume in-person volunteering. I can’t wait to make “Mama’s soup” in the ODS:).

For the past week, I was jealously looking at my Europen friends’ Instagram posts with the first early spring flowers emerging, with the first patches of green grass and lots of sunshine.

It looks like finally, we see the end of winter here, in Illinois. It was 46F today and lots of sunshine.
On top of this happy news, the Lakefront space will be open soon, almost a year after it was closed. The playgrounds and indoor swimming are also starting to reopen.

Next week, I am planning to go to the rt Institute first time after the last closure in the fall, and also, I am going to do escorting for the first time in a while. That’s mostly because I do not tolerate the cold weather well enough to escort during the freezing temperature, not because of any restrictions.

On Tuesday, I went to Chicago, mostly to deliver cookies for several people in the city. I was surprised and delighted to see that they put up a Christmas tree inside the Palatine train station.

There is way less people n the train that in was in October, but still more than in March and April.

END_OF_DOCUMENT_TOKEN_TO_BE_REPLACED

Today, I received an email from our volunteers’ coordinator at the ODS saying that all volunteering will be suspended till the end of March. Those were excruciating news. Although, when I was at the ODS last time, which was just nine days ago, I thought that the activities might be suspended for some time, but I honestly thought it would be till mid-December at the most.

Now the activities are shut down for almost five months. And now I am thinking about every minute of last Tuesday, how it was usual: you want to go? – I do not want, but I need to. And now I think that I should have stayed longer, although I know that thirty minutes extra won’t make up for the five months ahead.

I waved and waved, and I was saying: I will be back! I am not sure when, but I will be back. And now, for so many of the youth, it will be –  never.

On Saturday, I was invited to a special gathering of the Deer Grove Forest Preserve Volunteers. We celebrated the twenty-five years of Deer Grove Volunteers. It would be a huge celebration at the times of peace, but because of the pandemic, it was a really small group.

I felt honored to be invited because most of the people present at this meeting were there from the start, or almost from the start, and I have been with DGNAV for only six and a half years.
There were lots of stories told, and a representative from the Cook County Forest Preserves told us how we are the best group of volunteers and how they are not telling us what to do because we are self-guided and only need to coordinate with FPCC.

And it was a beautiful day, just like this whole week, and it was 75F, and I do not even know what it was in the sun 🙂

Life past, present, thoughts about the future, and ever changing world

Mindset Coach for women in business