Gotheborg, a replica of the 18th-century ship, stayed in the Helsinki Southen Harbor for Midsummer. Will almost missed the opportunity to visit it because I didn’t check the schedule in advance, but we still made it – just two hours before her departure to Stockholm.

END_OF_DOCUMENT_TOKEN_TO_BE_REPLACED

There are two more museums in Hameenlinna, which are situated on the Hame Castle grounds: the Military museum, which is dedicated to the history of everything war-related in Finland, and the Prison museum, which is located in the building that served as a prison until 1993. Both of these museums are very educational, and I want to come there one more time, to learn more about Finnish history. When we were there, it was a sort of information overflow. I know that I can look up most of the topics which are covered by the museum exhibits, but it’s different.

Below are just some photos, to give an idea of the museums’ collections (and the Military museum has a huge outdoor exhibit, which was close to impossible to attend in the midday with +86 F.

END_OF_DOCUMENT_TOKEN_TO_BE_REPLACED 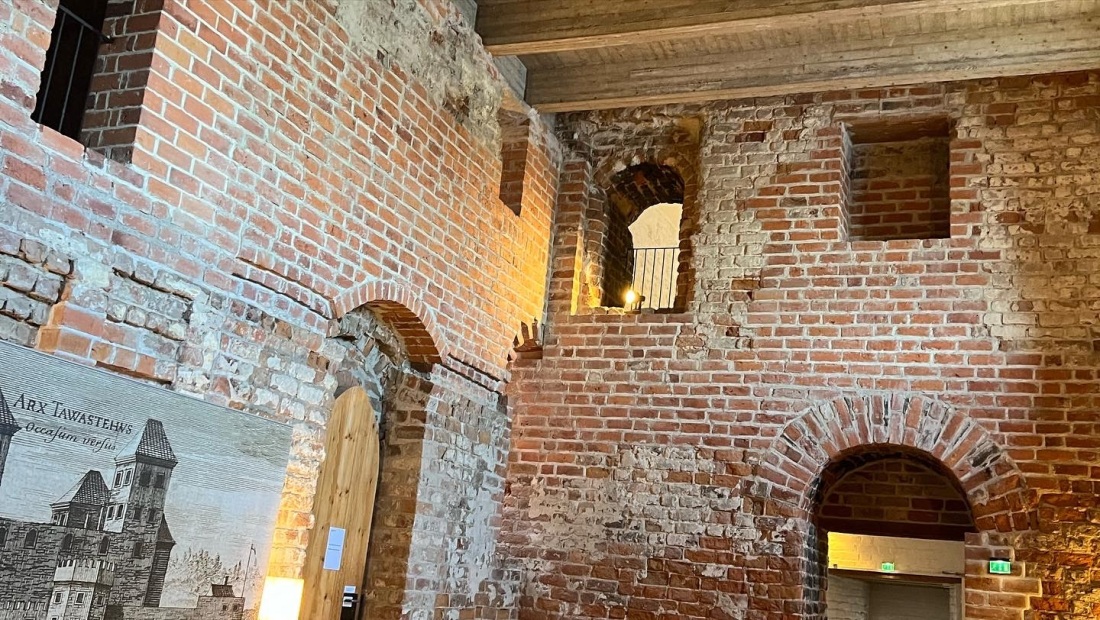 The last several pictures form the castle – I know they make almost no sense to those who never saw the castle, and I know they are “the same,” but still I wanted to show a couple more pieces of Medieval architecture.

END_OF_DOCUMENT_TOKEN_TO_BE_REPLACED

They say that the castle has been built for 700 years and it is still in process since the current restoration work is considered to be a continuation of the building of the castle. We spent a lot of time, exploring different rooms; unfortunately, there were no English tours offered the day we were there, so we often could not map the rooms to their website descriptions.

END_OF_DOCUMENT_TOKEN_TO_BE_REPLACED

We had a list of museums we thought we wanted to visit on Saturday (our flight out was at 6-30 PM, so we had most of the day). The Museum of Occupation was something new on the list of Vilnius museums, and I saw that it was very popular. Since this museum was the furthest from our hotel, we decided to start there and see how much time we had left for other museums.

But that museum impressed us so much that after spending 2.5 hours there, we realized we could not go anywhere else, so we spent the rest of that day walking along the streets of Old Town and talking about what we saw.

There is no other museum like this in any of the former Soviet Republics, and I think that if such museums were open in all the Russian cities, maybe, maybe… maybe things would look differently today.

The museum is located in a former Lithuanian KGB building, and the KGB internal prison is still preserved in the basement. Exhibits on the first and second floors present the history of Lithuania’s fight for freedom from 1940 to 1991.

After leaving the museum, Boris said: I am trying to figure out which parts we didn’t know. We knew most of the facts, but in some cases, we were not aware of the magnitude of the events, and in some, we simply never gave it enough thought, which I am now ashamed of.

We knew about the Forest Brothers, but I had no idea that they kept fighting until 1953! I didn’t know how well they were organized, how much support did they have in the country, and I didn’t know about their multiple unsuccessful attempts to get some support from the West.

Knowing these facts, there is no wonder to see such overwhelming support for Ukraine everywhere in Lithuania!

The exhibit explains how “a quiet resistance” rolled out after the Forest Brothers were defeated. And once again, it made me think about the time I visited Lithuania when I was a teen and a young adult. I am ashamed of myself now that I think about how we were coming there, the occupants, and how we were oblivious that we were seen as occupants. Also, I know many Russians who moved to Lithuania after the war and after the mass deportations, and they were completely ignorant about their role in the occupation.

The part of the museum that talks about the labor camps was somewhat less impressive because I knew a lot about them. But the KGB prison left a completely grave impression, even though, theoretically, we knew how the suspects and the prisoners were treated.

And one of the most impressive parts of the exhibit was the room where they presented the complete organizational chart of the Lithuanian KGB organization, with names and photographs! That’s where I thought – we should have had this for each KGB organization on the territory of the former Soviet Union! Then, maybe…

I am not sure whether the pictures can add much, but I tried to make them informative. As for the prison, the most horrifying thing is that it is real, and not only real but also very recent.

END_OF_DOCUMENT_TOKEN_TO_BE_REPLACED

OMG, what a wonderful museum! It was just a block away from our hotel, but we didn’t notice it first because the entrance is hidden behind the heavy gates, and you need to press a buzzer, and they actually ask who are you and whether you really want to enter!

One museum with hand sanitizer everywhere :). Some old toys are behind the glass, but there are copies available for play, and you can touch and try pretty much everything. There were so many families, and kids were having the time of their lives!

And I want to mention, that Boris liked playing with lots of these toys 🙂

END_OF_DOCUMENT_TOKEN_TO_BE_REPLACED

I think that it has been at least forty years since I visited Trakai, and all these years I wanted to do it again. Boris was there more recently but he was also surprised by the changes. When we entered the castle, he even said – but that’s a different castle! The castle was the same, it’s just that there was a lot of reconstruction work done in the past years.

Here is the information about Trakai Castle, and I will just say that it is beautiful, even when the weather is not so good :).

I didn’t remember from the first time I visited that there was and still is a large Karaim and Tatar population, our guide told us how they were invited/resettled by Grand Duke Vytautas, and that their culture is still preserved. Since by that time we were already on the road for a while, we started our visit to Trakai with lunch at a Karaim restaurant.

END_OF_DOCUMENT_TOKEN_TO_BE_REPLACED

On Friday, we took a private tour called “Three Capitals of Lithuania.” It was a pretty good deal: 160 euros for up to four people, with a private tour guide/driver, and it included a walking tour of the Old town, a trip to Kernave, and a trip to Trakai and the tours in both. I jumped on this opportunity because I wanted to visit Trakai – I remembered it since I was there a long time ago, probably forty years if not more.

It ended up being a decent tour. Granted, we had better tour guides in the past, but it was great to have a plan and to be able to visit two historical sites in one trip. I talked with our guide most of the way to get as much additional information about the past and present of the country as possible.

I thought I knew quite a bit about the history of Lithuania, but it turned out it was almost nothing. We knew it was the last European country to be baptized (in 1387). Still, we didn’t realize that the Great Duchy of Lithuania raised to its most might and glory being a pagan state. I am now reading about the history of Lithuania in the 13th and 14th centuries; how it took control over the Kievan Rus, which had already broken into multiple feudal states by that time. And the facts that I am reading about make me wonder who exactly stood against the Golden Hord and shielded the rest of Europe from the Mongols.

Lithuanians are cautious about using the ancient flag; as our guide said, “it was also an ancient Belarussian flag.” I believe that this goes more to whether the Great Duchy of Lithuania should be considered a Lithuanian or a Belarussian state. There was no written Lithuanian language until the end of the 19th century (same as with Finnish and Estonian languages). Our guide mentioned the official documents written in Polish, Latin, German, old Russian, and old Belarussian languages. And I already know that only about 10% of the Grand Duchy population were ethnical Lithuanians. I need to do a lot of reading to better understand that historical period, but at least I noted that I have a lot of blind spots in this area. And now – some pictures.

A tour of Vilnius Old town.

END_OF_DOCUMENT_TOKEN_TO_BE_REPLACED 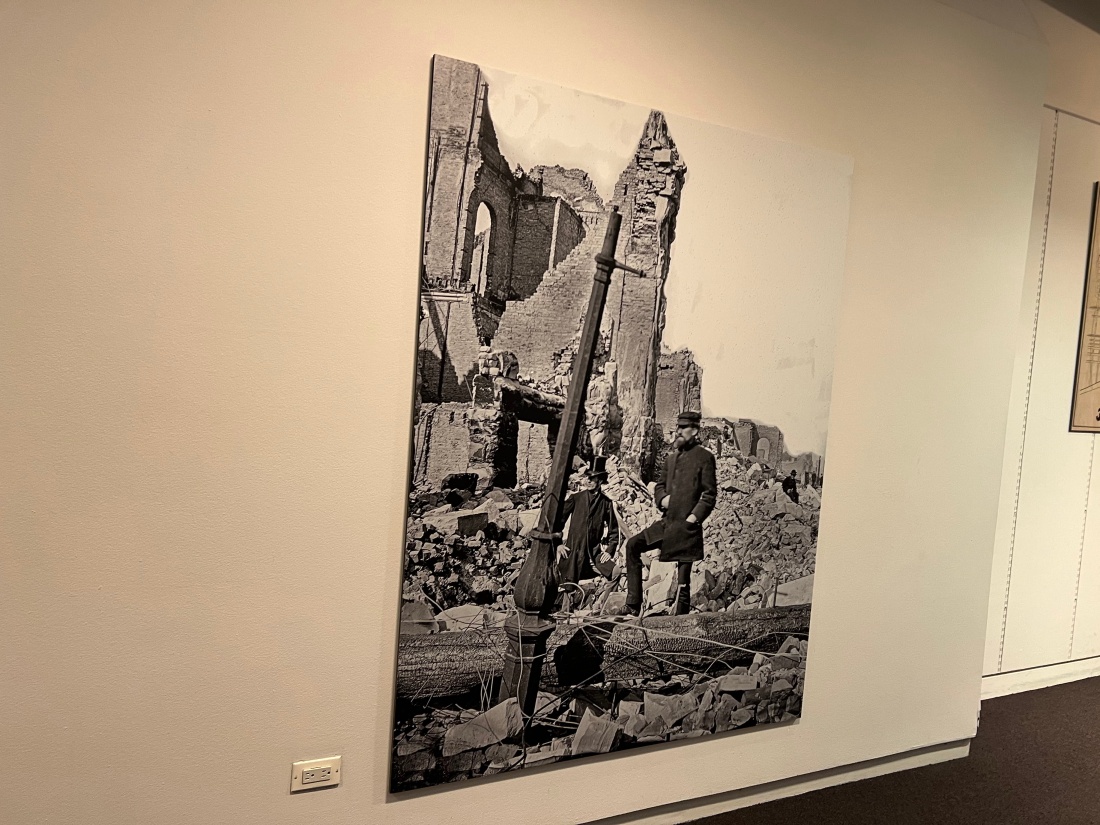 We know that cameras and photographs already existed at the time of the Great Chicago Fire. And we all saw the photographs which were taken during those days. However, one hundred and fifty years ago, there was a disconnect between technologies: the cameras were able to capture way more details that could be printed.

The glass negatives were huge, and the prints were small. And the most disappointing part is that most of the negative didn’t survive. Not all of them, however! And can you imagine what could happen when the exceptional quality of the glass negatives was combined with the digital printing technologies?! Now, you can see the results at this exhibit. The wall-size prints, including a panorama combined of five different shots taken from the roof of the survived warehouse.

END_OF_DOCUMENT_TOKEN_TO_BE_REPLACED

On Wednesday, I attended the first live event organized by Chicago Architectural Foundation since before the pandemic. They told us that the last event happened on March 10, 2020). I purchased the tickets the first day I saw this announcement, which was when the infections numbers were still high, and it was hard to tell in which direction things would be evolving.

The event was dedicated to the 150th anniversary of the Great Chicago Fire, and it was called “The Tales of the Night Chicago Burned.” The storyteller Scott Whitehair spent months researching the topic. In the Chicago History Museum archive, he searched for diaries, letters, and articles, which captured the lives of the ordinary people who lived in Chicago 150 years ago and witnessed that dramatic event.

The presentation was 75 minutes long. Whitehair chose the stories of five people and followed them through two days that two nights while the city was burning, and morning when the fire started to cease.

It was such a powerful and emotional presentation! Also, the author connected the Great Chicago Fire with the pandemic, and he talked about how the city will be rebuilt: not from the ashes as it was one-hundred-fifty years ago, but how it can come to life, and how we all can help.

I am so glad that things are coming back :). Can’t have enough!