The next day after I left for Europe, Chicago was hit by a heavy storm, and four inches of water dropped over the Northern part of the city, including Rogers Park. Both garden units in our building, the storage rooms and the gym, were flooded.
Somehow, I was not included in the original email chain and learned it all postfactum.
The damage is massive, and I have no idea when everything will be repaired:

Last year, I saw people biking on Lake Shore Drive when I was doing my usual Sunday biking – I didn’t know anything about Bike the Drive! Since I learned about it, I did not miss my chance to participate.

As it was my first time, I didn’t know how things worked, and I thought I could bike as far as I felt comfortable and get off the Drive any moment. Only when I received the “day of the event” package in the email I realize that there were just a couple of opportunities to get on and off the course.

Judging by my usual long rides, I decided to turn back at Oakwood, which was one of the designated turning points, but when I reached it I didn’t see any opportunity to turn around. Most likely, I would be able to go to the most Southern point of the Drive – the Museum of Science and Industry, but then it would take longer than I planned to spend on this event. So I looked to my left, and when I saw a gap in the median, I moved to the left and merged into the stream of bikers going north.

When I reached Millennium Park, I stopped for activities and a pancake breakfast and then continued to the northern end of Lakeshore Drive.
I covered a total distance of 32 miles, and I didn’t feel tired at all – and that’s what I am most happy about.

When we were approaching the end of the Drive, one gentleman on my right said – you are always catching up with me, no matter how much I try to get ahead! I told him, sorry, that was not intentional (to be honest, I didn’t even register his presence). I said – I am just consistent. It didn’t feel like I stretched myself; I could do more (and I was not sore the next day).

Another thing that I need to think more about is that I didn’t eat anything before the ride and didn’t drink anything. Initially, I planned to each some fruits before going, but I didn’t feel like I wanted any, and I left the house at 6 AM without food or drink. I thought that I might feel too hungry in the middle of the ride, but I felt great. At 8 AM, when I stopped at Millennium Park, I went to find breakfast. I’d already covered 21 miles by that time and thought I would be very hungry. However, I ate just two pancakes and two breakfast sausages and didn’t want more. I had a great feeling in my body, not needing to process any food and focusing on the ride.
There should be at least two of my photos from the ride, but I found just one on the event website. I will try to find more later 🙂 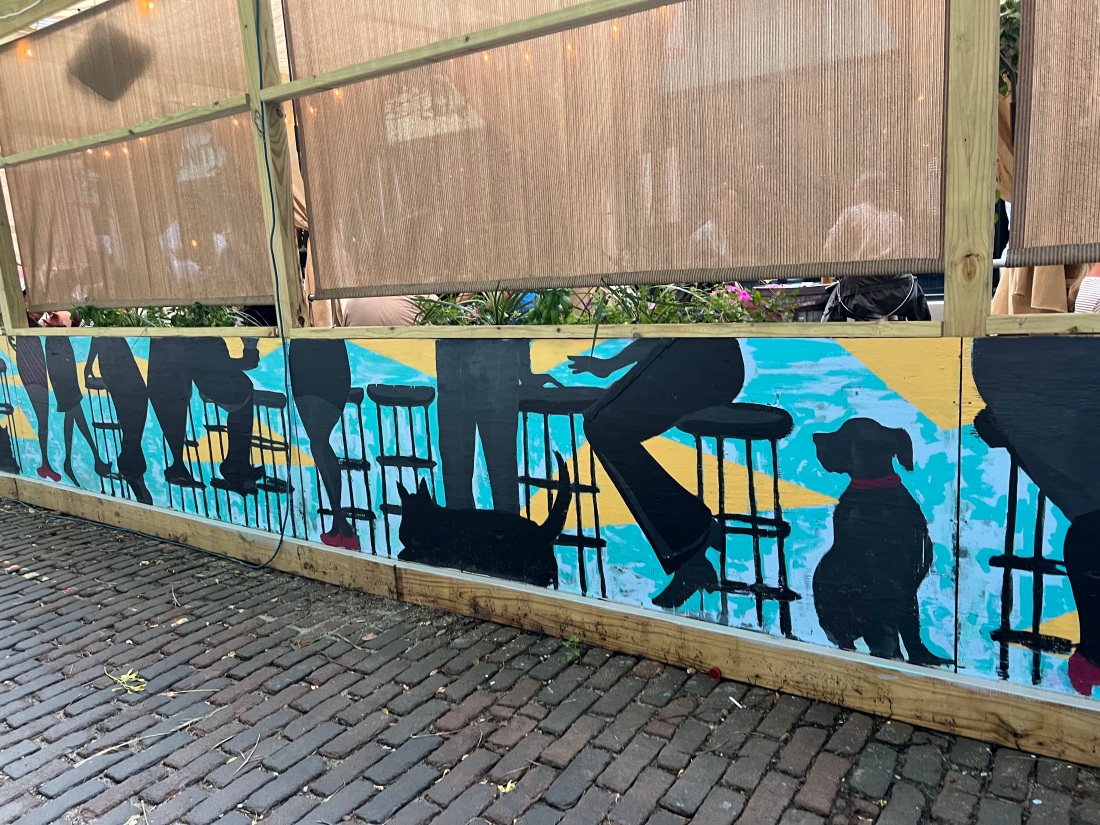 I had grand plans for the past weekend, which ended up being realized for at most 70%. If was a long weekend, starting with our monthly Wellness Friday. I went for what I hoped would be an enjoyable semi-long ride. On my way back, near Montrose Harbor, an older gentleman decided to cross to the exit from the pedestrian lane right in front of me. I had no time to brake, and I did my best to make a sharp left turn so I won’t knock him off. I still touched him, but slightly, so he didn’t fall. As for me, I ended up falling off, although not very bad.

My chain had fallen off, the handlebar turned sideways, and my knee was scratched pretty seriously, but at least I didn’t get a concussion!

Still, it was a bad start to the day. I lost a lot of time fixing the chain, straightening the handlebar, getting back on the Trail, and then taking care of my knee at home.

And then, I could not return to my original plans for most of the weekend. The heavy rain most of Saturday didn’t help either. To be fair, I planned a little bit too much for this weekend, and it is possible that I would have to abandon many of my plans regardless of this bike accident, but I still blame those who do not look to the left and the right before crossing!

END_OF_DOCUMENT_TOKEN_TO_BE_REPLACED

“Do you like the Soth Side?” a young woman in the youth shelter asked me. We talked about her home; she said she is from St. Louis and wants to return there. “What about Chicago?” I asked her.

– Chicago is my second best. The South Side

-Which places do you like on the South Side?

-It’s not places; I like being there. I like how I feel. It gives me good vibes. People are friendly, and I feel good when I walk there and people say Hi.

-I like how you said it! It’s very important to feel good vibes!

And then she asked: Do you like South Side?

She asked with hope in her voice, and I avoided the answer.

I do not know it enough, although Igor took me to tour the South Side landmarks on multiple occasions. It is a foreign land for me; even though people are indeed nice and friendly, I do not belong there. And this young woman is blissfully ignorant of that.

I don’t know what to make out of that except for acknowledging the fact.. 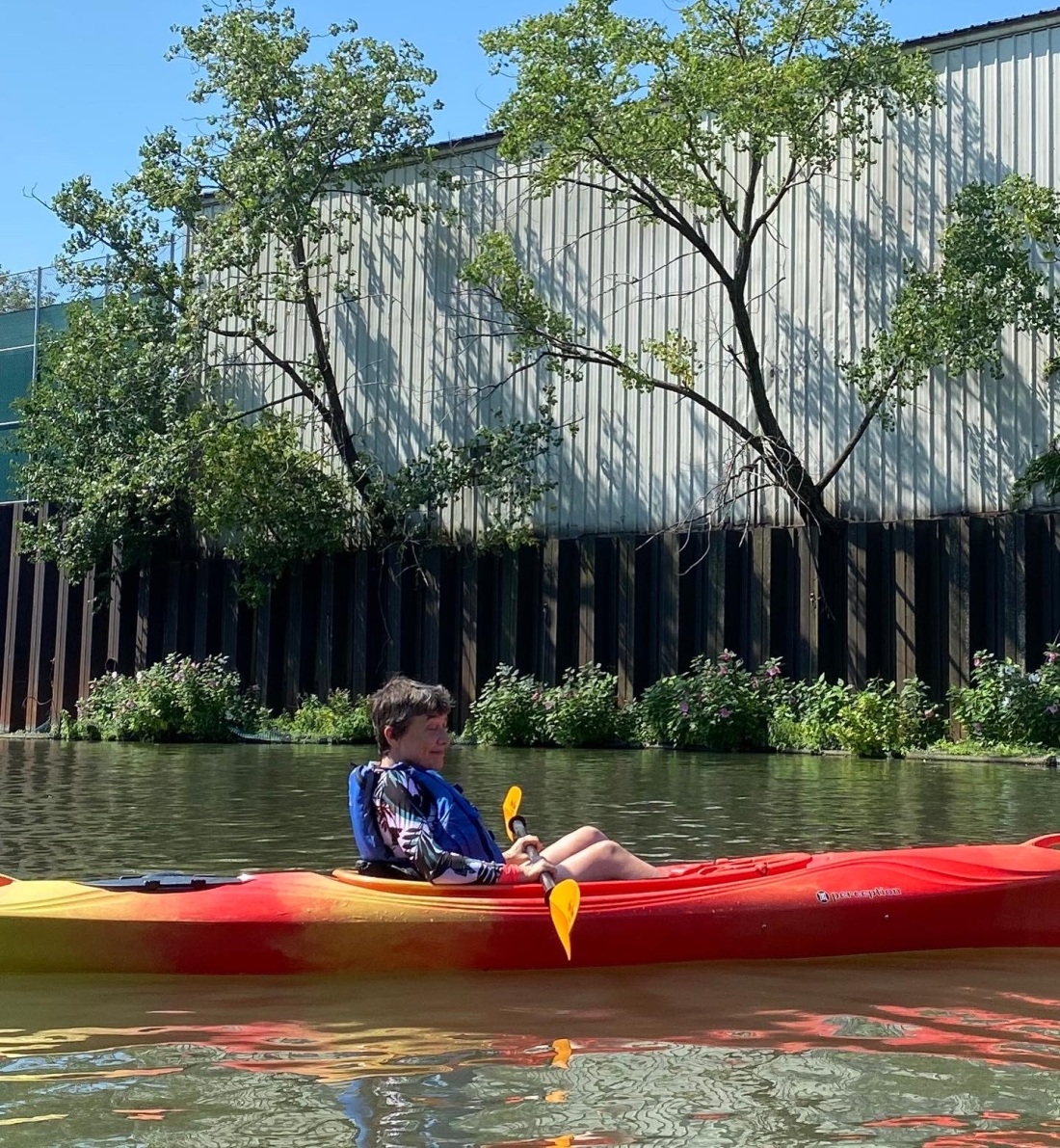 I had to work for the past two “Wellness Fridays” for half-day, and today, I took a Friday off to compensate for these two halves. It was the only day off I took during Boris’ visit, and we had plans.

The first and the most important thing we did – we went kayaking! There are many kayaking opportunities in Chicago, and I knew that Boris wanted to try it. However, I was more than scared to try, and the reason I finally gave in was the offer from the Shedd Aquarium: they run “Kayaking for conservation” tours, where they show the conservation and restoration efforts on the Chicago RIver. I chose a tour “for people with no experience” and signed us up.

Boris really enjoyed it. As for me, I am happy that I overcame my fears, although it was not easy. Perhaps if I would practice more, I would start to enjoy it. Today it was mostly “I made it!”

END_OF_DOCUMENT_TOKEN_TO_BE_REPLACED

When Anna and the girls made plans to come to Chicago today, Anna nor I realized that it would be the last day of Lollapalooza!

We survived, though it was not easy; the most challenging moment for us was getting to the Art Institute because we had to navigate through the crowd with very different intentions 🙂

I could never imagine that any Broadway in Chicago show could be a disappointment, yet it happened! It seemed, however, that Boris and I were the only two people in the audience who were disappointed. I checked several reviews – all of them are very positive. Only two of them mentioned imperfect sound mix, which made it difficult to understand the lyrics. In fact, it was so bad, that if I won’t know most of the lyrics by heart, it would be impossible. I do not want to go into details of what was bad, but I think that pretty much everything didn’t sound it’s best. Maybe, it was just that performance, because I hate to be in a disappointed minority :).

As I mentioned earlier, recently, I was re-certified to be a host for MAC (Midwest Access Coalition) and started to host clients. Now, this activity is quickly starting to dominate in all my voluntieeering. I am shocked by how many people come from different states and the number of challenges they face.

Even when MAC helps with hosting, driving to and from, bus tickets, you name it; there are still mounting challenges! Some can’t find a daycare for a child. The bus is late, broken, or canceled. Some people are hosting non-stop, back-to-back. It’s insane. And that’s just the beginning!

For the past several days, I was saying to myself that it’s a new underground railroad, and today I saw that Mayor Lori said something similar: “I’m really thinking a lot about the fugitive slave laws that were passed earlier in our country’s history. We can’t go back to those times”

Speaking about Mayor Lori, she signed an executive order protecting people coming out of state to have an abortion in Illinois and also protecting the abortion providers. Details are here.

I hope that it will always remain the case in Illinois

Thinking about myself in the times of the Soviet Union and how I felt in other “socialist republics,” and thinking about the cries of “discrimination against the Russian language,” whether it is in Ukraine, Estonia, or another independent country, I feel like what some people call “discrimination,” is, in fact, taking their previous privileges away.

I think it is true in many different settings.

In the same way, men often do not believe women are discriminated against because they consider their entitlement a norm. When their privileges are taken away, they consider it a deprivation of their rights. And in the same way, some white people believe they are placed in a disadvantaged position only because their white privileges are taken away.

I am shocked that so many people do not realize the level of police profiling and do not see any problem with it on the basis that “Black really commit more crimes!” From the moment when the Highland Shooting happened, I knew it would draw public attention primarily because both the suspect and the victims were white. After all, there were a couple of shootings on the South Side the same weekend, which went virtually unnoticed because “there are always shootings on the South Side.”

I do not know what will it take to change that.

Yesterday, my friend Lena from Ann Arbor came to visit me for the weekend, and today was a blast! Not even mentioning how much I enjoy Lena’s company, what a fun person she is, but we did tons of cool things together.

We started the day with the Millennium Art Fair on Michigan Avenue, where I bought two rings with flowers inside, and Lena bought a pair of earrings with butterfly wings (they explained to us that they collect the wings from dead butterflies).