For the most part, Illinois is till currently in Phase 1B of the vaccination program. In order to get inoculated, you have to be 65 or older, or (with a few exceptions) an essential worker, or a teacher, or (in most parts of the state) be an adult with some kind of a long-term health issue. This means that most adults and none of the kids still can’t get it.

For the most part.

In the end of February, the City of Chicago quietly launched the Protect Chicago Plus initiative, where the city is offering vaccinations to everybody age 18 or older who live in certain community areas and set up temporary vaccination sites. The idea is that the majority-black and majority-Hispanic neighborhoods have seen higher-than-average number of COVID-19 cases, hospitalizations and deaths, but also have fewer opportunities to get the vaccines. For example, the Lakeview neighborhood up on the North Side has a number of doctors’ offices, clinics and pharmacies. In North Lawndale, you can count those on two hands and still have fingers left over.

The city decided to set eligibility based on community areas, which makes sense. Neighborhoods come and go, their borders shift, and there isn’t always consensus on what they’re called and borders even are, while Chicago community areas have endured, with very few changes, for almost 100 years.

But it does create some interesting wrinkles.

To much of Chicago, Austin is just one of the many black and poor communities in Chicago. And there are parts of it there are that. 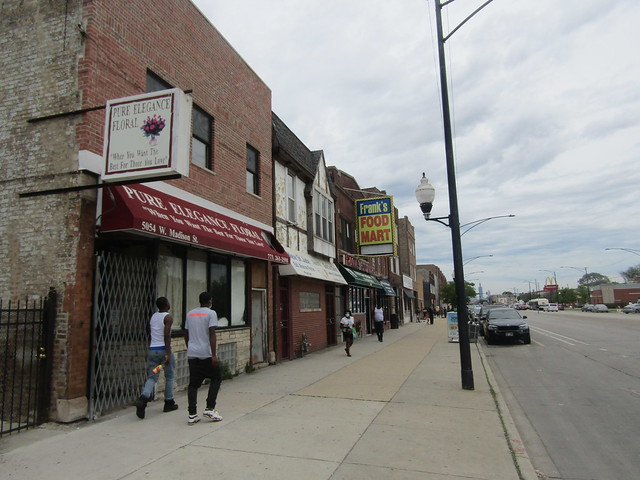 But it’s also a community that experienced White Flight later than most of Chicago (in the 1970s), and some parts of it never quite experienced it at all. The Galewood neighborhood in the northwestern part of Austin is an obvious example, but the Island neighborhood at the community area’s southwest tip has more white people than most non-Galewood parts of Austin. The northeastern parts of Austin have a growing Mexican-American population, many of them moving from the gentrifying, increasingly expensive neighborhoods further east. Furthermore, it is generally understood that, the further north of the ‘L’/Metra tracks you get, the more likely you are to run into middle-class households, and it is also generally understood that the parts of Austin south of Division Street have higher crime rates than the parts north of it. There are some interesting dynamics on the Austin Boulevard, which forms the Chicago/Oak Park border between Roosevelt Road and North Avenue. Galewood residents describe their neighborhood as one of Chicago’s best-kept secret, because it’s generally quiet and safe. 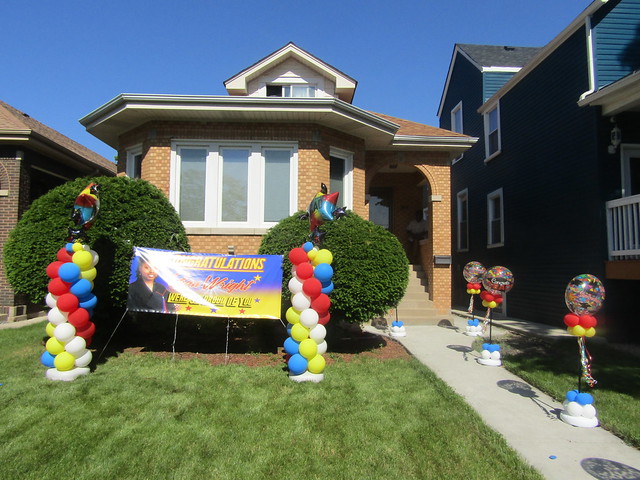 Austin is a large community area, and, as you can see, the demographics vary. But the entire Austin community area is part of Protect Chicago Plus, no matter where in Austin you are.

Now, why may ask – why didn’t the city do Austin sans Galewood? But this is where we get into the whole community areas vs neighborhoods thing. Austin’s borders are clear, but Galewood’s borders are murkier. In the early 80s, everybody would probably agree that it’s between Harlem Avenue in the west, North Avenue in the south, Central Avenue in the east and the Milwaukee West Line railroad tracks in the north. These days, people are more likely to put the east border a bit further west, along Austin Boulevard. But there is still ambiguity.

There is also the fact that, even if you go with the Austin Boulevard as the eastern border, that part of Chicago is fairly racially mixed. Should the African-Americans and Hispanics who live in Galewood get penalized for living in the area that’s more white than most of Austin?

And it’s not just Austin. While North Lawndale doesn’t have majority middle-class areas the way Austin does, the east side of the community area (the part east of California Avenue) have gotten noticeably whiter in the seven years I’ve been writing for Austin Weekly News. Humboldt Park community area, especially its majority-Puerto Rican east half, have been slowly but surely gentrifying for decades.

So what would I do about it? Nothing. Doing it on anything but community area basis would only complicate the process, and I ultimately support anything that would vaccinate as many people as possible. Whatever the residents’ race or economic status may be, they live next to each other, they interact with each other. The most people are vaccinated, the fewer people there are to infect, and the fewer ways there is for virus to spread.

But these little wrinkles show a major reason why ensuring that vaccines get to the most vulnerable Chicagoans is more complicated than anyone would like.

Information about SQL (PostgreSQL & SQL Server) from the Asylum.