On a typical day, I would wake up, have a cup of coffee (instant or greek, we didn’t have coffee makers) with a little bit of something, and head to the Baltic railway station. There was no subway station close to where I lived back then, so I had to take a tram for about 20 min and then walk.

Each class in the University was divided into groups, like homerooms at school, and everybody in a group would have the same schedule for all subjects, except for English and PE. We felt like one unit, and usually took a train together. Many groups had a designated train car (something like “the third from the locomotive”), and everybody would sit together. In some cases, people might get on the train at one of the subsequent stops, but they would still find their group, and those who got on the train earlier, would hold places for them.

In most of the train cars, there were wooden benches, each of which could accommodate three people, and a pair of benches faced one another. This way, six people could sit together and have a conversation. And if you add two more benches on the other side, there would be enough space for twelve, which would be half of the group. Below is a photo if exactly the same car which I found on the internet. 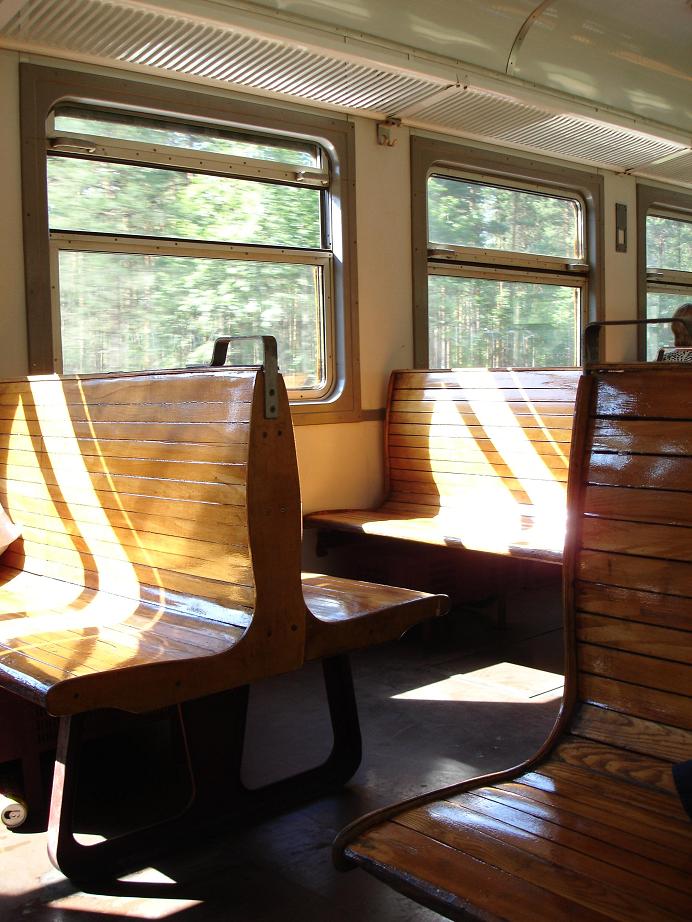 We rarely had backpacks; they were yet another “deficit,” and in the early 80s we didn’t even know about backpacks for school – they were strictly hiking equipment. Girls would carry their notebooks in the totes, and most of the boys had “diplomats” – the hard cases, which you could position on your laps during the long train ride. On this makeshift desk, you could finish your homework, or copy it from somebody – there was no concept of academic integrity – or you would play cards. It was an hour-long train ride, twice a day, with no computers or cellphones. Love, friendship, breakup, and betrail – everything could happen during a train ride, and a question in a hallway: which train are you taking? Let’s go together! always sounded promising.

Back to our daily routine. We would disembark at the University train station and walk to the building of the Department of Mathematics and Mechanics.

If you have a lecture, you try to listen and take notes (professors rarely checked whether anybody in the audience understands what they are talking about). If it would be a “seminar,” it will be very much like a lesson in school, homework check, new material explanation, blackboard, quizzes, and grades. If you had PE, there were no showers or lockers, so you had to carry your stinky uniform around. If you had more than two pairs that day, you most likely flunk at least one. You needed a break, and you needed to eat.

The was a huge canteen in a separate building, which would serve all STEM departments and research institutes, with long lines and mediocre food. We would rarely go there. Our department building had three cafeterias, and there were almost always long lines, especially during the actual lunch breaks, so students were trying to get there any time except for the actual lunch break!

To avoid the lines, we often took turns in taking notes. One person would go to the cafeteria during the first half of the pair, and the other one would take notes at the lecture using a carbon paper. For the second half, they would switch. We rarely tried to understand what a professor was talking about; we were taking notes to study before the final exam.

For the first two years, the only reason we stayed on campus after the classes were over, was planning and rehearsing for the Math-Mech Day. I’ve already mentioned that this was a highly politicized activity, and I will talk about it in more detail in some subsequent posts. Most of the days we would head back to the city. There we would hang out in somebody’s houses, depending on who had a room of their own. Or go to the movies. Or actually do homework:). We partied occasionally, but not that often, because first, you need to get permission from your parents to have a party – 99%b of us lived together with their parents.

How did we feel about our lives? Overall, we were pretty happy. For me, the only reason for being unhappy would be my yet another personal drama. And sometimes yet another financial crisis. We were young and hopeful and had all our lives ahead. Although in my wildest dreams, I could not imagine what happened to me later in my real life!

My historical posts are being published in random order. Please refer to the page Hettie’s timeline to find where exactly each post belongs, and what was before and after.

My name is Henrietta (Hettie) Dombrovskaya. I was born in Saint-Petersburg, Russian (actually, back then – Leningrad, USSR) in 1963, and immigrated to the United States in 1996. I love Saint Petersburg, the city I was born and raised in, and I think it’s one of the most beautiful places in the world. Similarly (but differently) I love Chicago, and can’t imagine myself moving somewhere else in the observable future. I have three children, Igor, Vlad and Anna, all adults living on their own, and one (so far) granddaughter Nadia. I also believe that my children are the best thing that happened in my life. As for my professional life, I am working in the field of Information Technologies. When I was twenty, I’ve declared that the databases are the coolest thing invented and that I want to do them for the rest of my life. Thirty plus years later, I still believe it’s true, and still, believe that the databases are the best. These two statements together imply that I think a person can have it all, and indeed, I think so! Keep reading my journals to find out how I did it. View all posts by Hettie D.