I ended up doing this article because, back in November, a week before Thanksgiving, I was taking the bus past the intersection of Chicago and Laramie avenues and noticed a large, bright mural on the building at the northeast corner intersection that definitely wasn’t there back in June. I noticed the name of the artist – the iconic Chicago muralist Rahmaan “Statik” Barnes – and tried to reach out to him. It took a few weeks to successfully pitch the things and get in touch with Barnes, but I filed the article December 9.

A very truncated version of the article was published in print, in the December 15 issue of Austin Weekly News, but, as of this writing, it never showed up online. Since I thought that the print version lost some pretty interesting parts, and since it doesn’t officially exist online in any form, I decided to post the article as submitted.

A bit of a side note. When I was trying to take a picture below, the group of Black teens who were hanging out nearby weren’t exactly happy to see a white guy with a camera. But when I persuaded them that I wasn’t there to photograph them, they offered me weed. 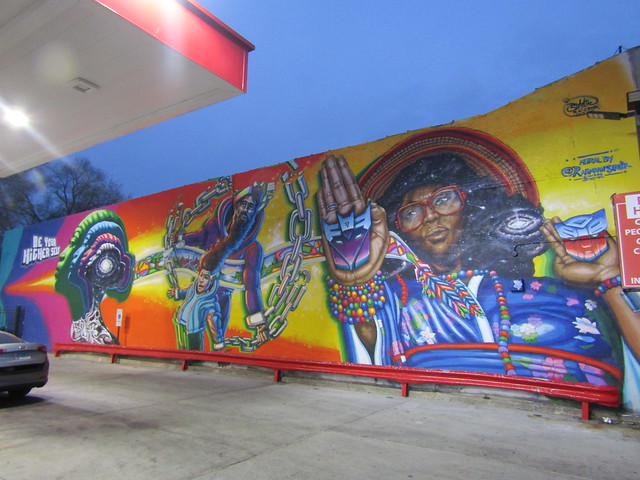 It’s the kind of mural that immediately catches the eye of anyone who passes through the intersection of Chicago and Laramie avenues.

Images of women with galaxies in their hair, broken shackles and a film strip that turns into a scarf has been painting over the entire west wall of the two-story building at 5142 W. Chicago Ave., right behind the Laramie CiTGO gas station and across the street from the historic Laramie State Bank building, 5200 W. Chicago Ave. Rahmaan “Statik” Barnes, a Pilsen-based Black artist, painted “Be Your Higher Self” mural to encourage Black people to realize their power and transcend their limitations.

While the mural was supposed to debut last spring, other commitments and bureaucratic delays meant that it wasn’t finished until August. Barnes said that he appreciated the ability to paint something without creative restrictions, and that all the hours he spent in the community gave him a chance to get to know Austin better.

Barnes painted murals all over Chicago. His West Side murals include the “Beacon of Light” mural on the east wall of the Westside Association for Community Action social service center in North Lawndale, at 3600 W. Ogden Ave.; and “Toward the Brighter Future” – a pair of murals decorating both sides of the ‘L’/Metra underpass at Central Avenue at the heart of Austin.

Barnes said that, with his work, he always tries to counterbalance negative images of Black people in the media by painting as many positive and empowering images as he can.

“So, the whole point is not to criticize – it’s to make art, make more art, make art as a counter piece of that statement,” he said. “It’s like, you know, better self-image, better spirit, better mind. You gotta start somewhere.”

“Be Your Higher Self” was commissioned by the B_Line [sic], a West Loop muralist collective. The organization didn’t respond to a request for comment by deadline, but in a Sept. 16, 2020 post on its official Facebook page, they announced an upcoming collaboration with Barnes, writing that they were “geeked to finally be working on a few things we’ve been chewing on for a while with one of Chicago’s best artists.”

Barnes said that B_Line had only two requirements – that the mural had to use the imagery from his existing works and that the mural had a visible message. He drew upon his older paintings. For example, the image on the left side of the mural – a silhouette of a woman with a galaxy in her head and other silhouettes radiating out – was something he painted 15 years ago.

“It became public artwork that has the overall message, which is being a better you, being the best in your own [life],” Barnes said. “That’s what being your higher self is about.”

The middle of the mural shows a young man and an older man breaking the chains together, the younger man’s hair blending into the older man’s beard. Barnes said that he wanted to illustrate father and son breaking “generational curses” – negative legacies passed down through generations and the negative ways younger generation can affect the older ones.

“Generational cruses may come from different points of reality, so like the idea [behind the image is] of father and son being liberated at the same time, reaching enlightenment,” he said, adding that he wanted to show them breaking the chains together because “that shit works both ways.”

The mural ends with the image of a Black woman with a galaxy in her hair, holding the symbols from the Transformers franchise in her hands. Barnes said that the image was a commentary on “all the rival factions in society” – having a goddess figure hold the faction symbols of the heroic Autobots and villainous Decepticons on the same level shows the “balance of the universe.”

“The whole point with the images of this wall is Black people looking powerful,” he said.

Barnes also thought it was important to have “that level of work” in the community, where people can see it for free, without having to go to museums.

“Be Your Higher Self” mural took longer than expected. Barnes took on the project while he already committed to two other murals in different parts of the city, and there were bureaucratic delays. He said he ended up working around 150-160 hours. Toward the end, he put in “20-hour days, or close to it,” which gave him a chance to see the community go through the entire day and night, which gave him a sense of Austin he might not have gotten any other way.

Barnes said that, when he started work, many people who stopped to talk to him were “skeptical” of what he was doing, but as the mural started to take shape, skepticism turned into enthusiasm.

For more information on Barnes and his work, visit https://www.rahmaanstatik.com/

I dont have the answers, just a lot of questions.